“The oppression of gay people starts in the most basic unit of society, the family… The very form of the family works against homosexuality….But gay liberation does not just mean reforms. It means a revolutionary change in our whole society. Reforms may makes things better for a while; changes in the law can make straight people a little less hostile, a little more tolerant – but reform cannot change the deep-down attitude of straight people that homosexuality is at best inferior to their own way of life, at worst a sickening perversion. It will take more than reforms to change this attitude, because it is rooted in our society’s most basic institution – the Patriarchal Family….It is because of the patriarchal family that reforms are not enough. Freedom for gay people will never be permanently won until everyone is freed from sexist role-playing and the straightjacket of sexist rules about our sexuality. And we will not be freed from these so long as each succeeding generation is brought up in the same old sexist way in the Patriarchal family….Yet although this struggle will be hard, and our victories not easily won, we are not in fact being idealistic to aim at abolishing the family and the cultural distinctions between men and women.”
— from Gay Liberation Front: Manifesto, London 1971, revised 1978 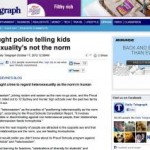 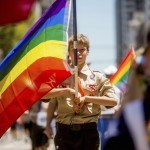