Via the Daily Signal
http://dailysignal.com/2015/06/25/christian-farmers-fined-13000-for-refusing-to-host-same-sex-wedding-fights-back/

The owners of a small family farm in upstate New York fined $13,000 for discriminating against a same-sex couple for refusing to host a wedding on their property are fighting back.

In an appeal filed today before an appellate division of the New York Supreme Court, a lawyer for Cynthia and Robert Gifford, owners of Liberty Ridge Farm near Albany, N.Y., argued that when finding them guilty, the court did not consider their constitutional freedoms and religious beliefs.

“[The decision] violates the Giffords’ free exercise of religion, freedom of expressive association, and freedom of expression protected under the United States and New York Constitutions,” James Trainor, an allied attorney with Alliance Defending Freedom, wrote in the appeal.

The Giffords were found guilty of “sexual orientation discrimination” by an administrative law judge last July.

Because Liberty Ridge Farm is open to the public for seasonal activities such as an annual fall festival, the state of New York classifies it as a public accommodation that therefore cannot discriminate on the basis of certain personal characteristics, including sexual orientation.

In a statement issued to press today, Trainor said the judge’s order “forces the Giffords to host same-sex ceremonies or to host no wedding ceremonies at all.” He added:

The conflict began on Sept. 25, 2012, when Melisa Erwin and Jennifer McCarthy, a lesbian couple, called the Giffords to ask them to host their same-sex wedding at Liberty Ridge Farm.

The Giffords live on the second and third floor of the barn and, when they host weddings on the first floor, open part of the second floor as a bridal suite.

Not wanting to go against her beliefs of traditional marriage, Cynthia Gifford politely declined the request. Unbeknownst to the Christian couple, the caller recorded their conversation. Shortly thereafter, the lesbian couple filed a complaint with the New York State Division of Human Rights.

“We’re not hateful people,” Gifford said in an interview with The Daily Signal, holding back tears. “We just believe that a marriage is between a man and a woman, and we do not want to hold a [same-sex] marriage ceremony here on our family farm because the state tells us we have to do it.”

As punishment, the government fined the family $10,000 and ordered them to pay an additional $3,000 to the women. The Giffords were also required to attend staff re-education training classes to teach the state’s viewpoint on marriage. These are the stipulations that the family is challenging with their appeal this week.

300,000 people gathered in Rome to protest against same sex marriage 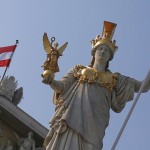