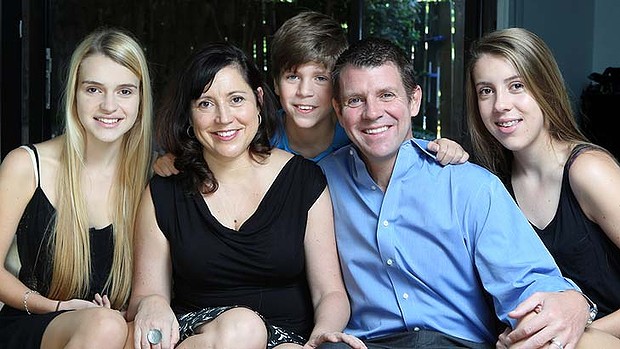 (Family signs up: Mike Baird with wife Kerryn and their children (from left) Cate, Luke and Laura. Picture: Janie Barrett)

As expected, Premier Mike Baird won the election. And it really was a personal victory for the clean-cut father of three.

A popular premier took an unpopular – but necessary – economic policy to the polls and won. He proved that responsible fiscal management and economic reform is not impossible in Australia, if you bring the people with you.
But if Barry O’Farrell hadn’t fallen on his sword over the Grange affair last year, the result could have been very different.

Luckily for NSW, Baird, 46, has done a standout job, both as Treasurer and neophyte Premier who took the state from national laggard to the best performing in terms of job creation and economic growth.

He proved his talents as a politician during a campaign in which he oozed charisma and believability, and thrived on contact with the public. The electorate has rewarded him with its trust.
Baird’s secret weapon and greatest asset is his wife of 25 years, Kerryn.  A warm, engaging person, she has been by his side since their university days, and he describes her as his “soulmate”.

When I interviewed him on my 2GB radio show, Baird was emotional as he chose Van Morrison’s song Brown Eyed Girl to dedicate to Kerryn.

“I wouldn’t be able to do this job without her,” he said. “As a team we make a very powerful combination.”
The couple met at a Christian youth convention 30 years ago in Katoomba where he was “struck with her beauty”. She liked his “lovely smile”, and the “twinkle” in his eye.

Kerryn was at university in Perth and Baird in Sydney so they had to conduct their long-distance romance the old fashioned way, with Sunday night phone calls when the rates were cheap, and a handwritten letter once a week.

“A lot of thoughts and feelings were written,” said Baird.
“So I think that was a fantastic way to begin.”

He worked three part-time jobs to save enough money to fly to Perth to visit Kerryn whenever possible, once arriving as a surprise for her 21st birthday.

As soon as she finished university she joined him in Sydney.

Baird says communication is the secret to a good marriage.

“I think that soulmate connection is critical. You need to be connected in the passions of life. We are connected in faith and in a desire to make a difference…

“Kerryn is wonderful with people. When she engages with people they love her genuineness and their interest in them. She goes a long way to making people feel special. She certainly does that to me.”
But Baird also acknowledges a healthy marriage takes hard work: “There are difficult times you face in life and in relationships.

“It’s a matter of persevering through them because it’s rare these days to have those long-term relationships but you’re so much richer for them.

“I look back now and through all the history, all the ups and downs, I am so much richer for having her by my side.”
Well, whatever Kerryn Baird is doing, it’s worked a treat for her husband and for the voters of NSW.
The win in his home state will be a relief to Prime Minister Tony Abbott, too, just a few weeks before the federal Budget. His embattled prime ministership would have struggled under the loss of another Liberal state to follow Queensland and Victoria.

Labor didn’t deserve to win back office in NSW after just four years in the wilderness. Memories of the squandered opportunities and corruption scandals of their 16 years are still too fresh. While Opposition Leader Luke Foley put in a stalwart effort after just three months in the job, he will now have plenty of time to reconsider his dishonest, union-driven campaign against electricity privatisation, which he pursued in defiance of sensible elders in his party.

For the record, the other two songs Baird chose to take with him if he were cast away on a desert island were: Talking Heads’ Psycho Killer and U2’s Beautiful Day.

I would have liked to tell you what songs Luke Foley chose so you could have compared the two men’s musical tastes but, sadly, he declined all invitations to my radio show.